It has been the story of Donald Trump’s brief political career: even when he is able to tout a significant accomplishment, a negative development, either circumstantial or self-inflicted, almost immediately overshadows it, dampening its positive effects.

Take Tuesday’s UAE-Bahrain-Israel normalisation deals brokered by Trump. In any other year, under any other president, that event would have dominated multiple news cycles and could very well have been considered one of the most memorable events of a presidency.

This was one of the few true political successes of Trump’s presidency, at least by the metric that even his political foes gave Trump credit, something that is remarkable in this environment of extreme political polarisation. Among the pats on the back were from his Democratic rival Joe Biden, who in August called the UAE-Israel announcement “historic”, and Washington Post columnist David Ignatius, who has hammered Trump for years but declared the deals a “huge achievement”. 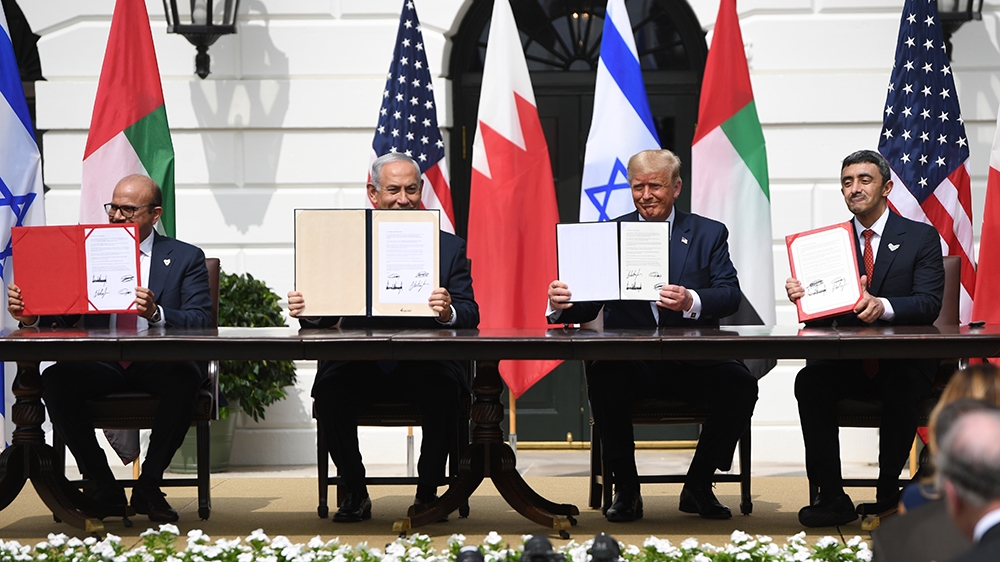 In typical fashion during the Trump presidency, the positive vibes were short-lived. But atypically, they were brief because of a combination of the current political climate and Trump’s penchant for changing the subject to something controversial and unpopular. Usually, it is either just the climate or Trump’s whims that derail good news; this week, both contributed to the change of subject.

The first strike against the normalisation deals boosting Trump’s image: the benefits of a foreign policy achievement in today’s political environment are slim to nil, as polling shows American voters are more attuned to and concerned about COVID-19, the economic fallout from the pandemic, healthcare, racial justice, and a litany of other issues.

Last month, Gallup polled Americans on the most important problem facing the country. “International issues, problems” was chosen by so few people (less than 0.5 percent), it was represented by an asterisk on their chart.

And an Economist/YouGov poll released this week asked likely voters which issue is most important to them. Only 5 percent said “foreign policy,” far behind “health care”, “jobs and the economy” and “climate change and the environment”.

Strike two for Trump: he and his campaign advisers stepped on his message by scheduling the White House event on the same day the president was set to appear on national TV to take questions from voters.

Within hours of Tuesday’s signing ceremony, Trump was at a town hall meeting in Philadelphia, Pennsylvania being grilled by average Americans about his handling of the pandemic, race issues, healthcare and immigration.

Despite the fact these were “uncommitted” voters questioning him, Trump did not tweak his defiant style, responding assertively that he has done “a very, very good job” dealing with coronavirus and downplaying the suggestion that there is “a race problem” in the US. And at this point, that defiant style is part of his DNA, whether voters like it or not.

“[I]f you are a little different, or a little outrageous, or if you do things that are bold or controversial, the press is going to write about you. I’ve always done things a little differently, I don’t mind controversy,” Trump wrote in, The Art of the Deal, in 1987, and it is a mindset he has carried into his political career. “The funny thing is that even a critical story, which may be hurtful personally, can be very valuable to your business.”

Whether this belief will translate to victory on election day is still a wide-open question. That strategy may have served Trump well as a New York real estate baron and it may have worked for the 2016 election, however, it has undoubtedly left him in a precarious position in his re-election effort.

Embattled presidents, especially those who are behind in the polls less than 50 days from the election, tend to tweak their messages to capitalise on their successes and to appeal to the largest number of voters as they can. And this president, who continues to suffer lagging approval ratings, could use a string of good news in the final weeks of the election.

For Trump this week, Americans’ current disinterest in foreign policy would likely have made it difficult for the Middle East deals to deeply resonate with voters. But his own practice of deliberately creating controversy and sidelining one of his biggest accomplishments in months virtually eliminated any chance of that political victory taking hold with voters.

Ahead of US election, Europe eyes an ally in climate change fight | US & Canada