Dublin, Ireland – On a crisp, bright morning in Dublin, worshippers sit on prayer mats spaced across a sport pitch, listening to a woman dressed head-to-toe in white recite the Quran.

From over the looming, concrete walls of the stadium, Catholic prayers barked into a microphone can be heard from the “rosary rally” protest outside.

Ireland’s hallowed sporting grounds, Croke Park, opened its doors to Muslims this Eid al-Adha so that they could gather in large numbers for the first time since the country’s coronavirus lockdown put strict limits on all indoor religious services.

Initially, the organisers had hoped 500 worshippers could attend Friday’s event, but a surge in new COVID-19 cases delayed an expected easing of restrictions.

Instead, only 200 people were allowed on the field, suitably spaced apart, aside from some children who stayed close to their parents, running around the prayer mats in circles or waving miniature Irish flags.

For many of the worshippers, Friday’s event was also a cherished opportunity to celebrate their dual identities – they are Muslim and Irish, and proud to be both.

“The Kaaba is the pulse and heart of the Muslim world,” said Karen Kirwan, the ceremony’s MC. “Well, Croke Park is the heartbeat of all the Irish people here in Ireland. It’s where we are drawn to.”

More than a stadium, Croke Park dominates a central position in Ireland’s psyche.

“Croke Park has been a physical expression of a nationalist, cultural, sporting organisation. And it’s freighted with history,” historian Tim Carey said.

The stands are named for historical figures or insurrections, such as Hill 16, said – falsely – to be built on rubble from the 1916 Rising, a failed rebellion that reignited the Irish independence struggle (the stand was built the previous year).

The arena is also the site of the most notorious atrocity of the Irish War of Independence, the Bloody Sunday massacre, in which 14 people were shot dead by police who swarmed the field during a match.

“To have a sporting venue attacked in such a manner by the state really put Croke Park in a different league in terms of symbolism,” Carey says.

After independence, the stadium was seen as a reflection of the new, often insular and deeply Catholic nation.

“The bishops threw the ball in at every major match in Croke Park until the 1970s,” Carey says.

But on Friday, as protesters – some carrying prayer beads or anti-Islam signs – screamed through a line of police officers at an anti-racism counterprotest outside the stadium walls, the highest-ranking Catholic in Ireland, Diarmuid Martin, spoke along with Anglican and Jewish representatives to the hundreds of Muslims gathered on the field, expressing support for the Eid celebration. 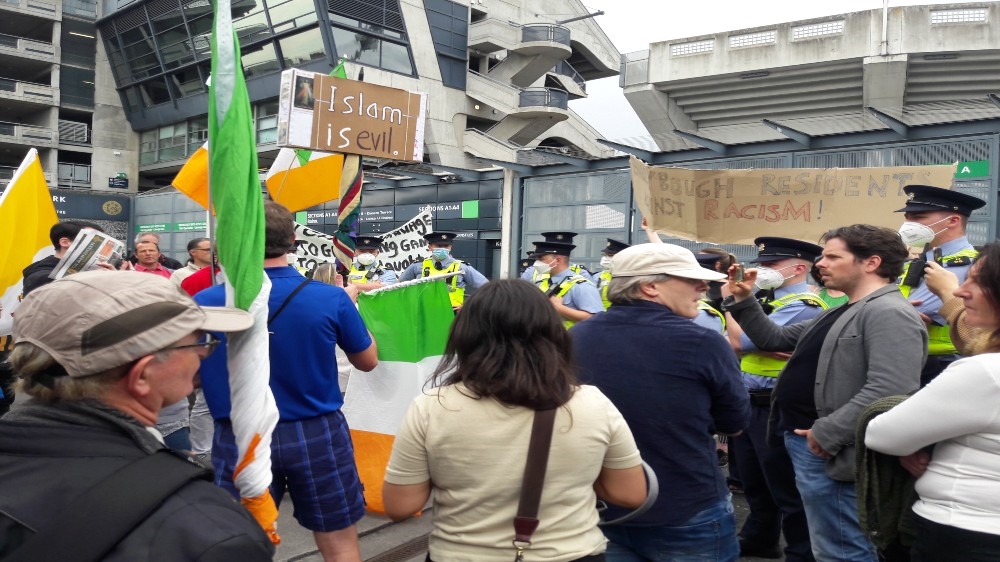 Protesters, some carrying prayer beads or anti-Islam signs, scream through a line of police officers at an anti-racism counterprotest outside the stadium walls [Shane Raymond/Al Jazeera]

Aside from the few dozen protesters outside, an online petition to stop the event, described as an “attack” on Christian culture, accumulated more than 24,000 signatures, according to the anti-immigration activists who organised it.

When the event was first announced, an article from a fringe news site falsely reported that animals would be slaughtered in Croke Park during the Eid celebrations as part of a “large blood sacrifice”. The claim was quickly debunked.

However, Carey said he reaction has been overwhelmingly positive inside the Gaelic Athletic Association community and the event’s organisers say that, while Irish Muslims still face Islamophobia, Irish society has been largely accepting.

“Ireland is the country of cead mile failte – a hundred thousand welcomes – and Ireland is a country that, in many ways, leads in embracing diversity,” said Umar al-Qadri, the Chair of the Irish Muslim Peace and Integration Council.

“Irish people have shown that, no matter the past, no matter what prejudices you have, you can reconcile and have peace.

“Having Eid in Croke Park is very historic. It’s very symbolic. For Muslims, it’s a sense of pride and the wider community have expressed their happiness.”

Al-Qadri was born in the Netherlands but moved to Pakistan as a teenager. When he returned, he found that right-wing parties were on the rise in the Netherlands, as was rhetoric against foreigners, Jews and Muslims.

“As with most immigrant communities, they were too busy at building their own lives and looking after their families back home,” al-Qadri said.

“That created fear that translated into anti-Muslim sentiments. And I wanted to avoid that in Ireland.”

Al-Qadri set up the Irish Muslim Peace & Integration Council to build bridges with the wider society, as well as to tackle “extremism” within the Muslim community.

During the coronavirus lockdown, al-Qadri issued a fatwa, an order by a Muslim leader, allowing adherents to gather online to say Friday prayers on sites that facilitate video streaming such as Facebook. Then, while watching a video showing German Muslims praying in an Ikea car park, he was inspired – or rather, he thought: “We can do better than that.”

Among the speeches at the Croke Park event – said in a mix of English, Arabic and Irish – was a talk by 21-year-old Abood Aljumaili, encouraging the attendees to try out the native Irish sport played at the stadium, like hurling. 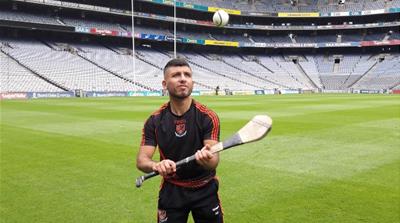 Aljumaili, 21, more commonly called Bonnar O’Loingsigh, fled Iraq as a child with his family in 2008. He started learning to play hurling a few years later.

“I didn’t even know how to hold the hurl properly,” Aljumaili said of the long wooden sticks used by players.

It was his second time in Croke Park and, once the ceremony ended, he took advantage of it, smacking a ball a quarter of the way across the pitch and chasing after it towards the goalposts.

Omayma Madani, 17, was not able to get a ticket to the event. Speaking in the accent of the south Dublin area where she grew up, she talked about how she has been made to feel uncomfortable travelling in some European countries as a Muslim, but rarely in Ireland.

She spoke about having to buy a specially-made hijab to go with the uniform of the Catholic school she attended and not being able to eat with her community during Ramadan and how her mosque was still eerily quiet when she last visited.

Madani was born in Ireland to parents who had immigrated from Algeria but, when asked how she saw her own identity, she did not answer with nationality or religion.

Instead, she said: “I’m an artist. I’m a boxer. I teach Arabic. I enjoy teaching, but I wouldn’t want to do it forever. I want to be a lawyer. And, one day, I want to be the prime minister of this country.”