President Donald Trump and Democratic challenger Joe Biden are both going to the fabled Iron Range mining region of Minnesota on Friday for duelling campaign events.

President Trump will appear at an airport in the town of Bemidji – population 15,000. Located near the Canadian border, Bemidji would seem an unlikely place to search for Republican voters.

But the rural heart of Minnesota has been trending Republican in recent years and Trump only lost there narrowly in 2016, he is now betting he can win in November, forcing challenger Joe Biden to play defence.

“Clearly, Trump and Minnesota Republicans believe this is a possible win for them. This is a very contested state,” said James Read, chair of political science at the College of St Benedict and St John’s University in Minnesota.

If Trump were to win Minnesota – no Republican president has since Richard Nixon in 1972 – it would be the equivalent of a political earthquake in the United States that would probably signal Trump victories in other critical Midwestern states like Wisconsin, Michigan and Pennsylvania.

“Judging by yard signs, if you get out of Minnesota-St Paul into the rural areas, you would think Trump is going to win by a landslide. Everyone sees that this is going to be close,” Read told Al Jazeera.

Polls show Biden with a 10 percentage-point lead over Trump in Minnesota, though local political analysts think the race is much closer because telephone and online surveys do not fully capture Trump’s support.

Clearly, Trump and Minnesota Republicans believe this is a possible win for them. This is a very contested state.

That calculus is not lost on Biden who will be making his first appearance as a presidential candidate in Minnesota whose 10 electoral votes Democrats cannot take for granted.

Trump’s visit to Bemidji will be his sixth visit to the state since becoming president. He is expected to claim a renewal of American steel production, fuelled by ore from Minnesota’s Iron Range, as a result of tariffs he imposed on Chinese imports.

Biden will appear at a union hall 240km (149 miles) east in the industrial port city of Duluth on Lake Superior, a historically Democratic stronghold at the centre of the Iron Range’s regional economy.

Biden’s campaign issued a pre-buttal on Wednesday of Trump’s economic argument. Polls show Biden and Trump evenly matched among voters on who is best to handle the economy.

“Steel shipments are down more than 25 percent from last year,” Biden said, touting his proposal to create jobs through massive federal investment in infrastructure projects.

It was in Minneapolis, 345km (214 miles) south of Bemidji and 245km (152 miles) south of Duluth, where George Floyd, a Black man, was killed by white police officer Derek Chauvin who knelt on Floyd’s neck while he was handcuffed and other officers held him face down in the street.

Broadcast on social media by a bystander, Floyd’s death sparked protests and three nights of civil unrest in Minneapolis that spread across the US and polarised the political landscape.

“A divide has emerged between rural voters and Minneapolis and the rest of Minnesota. There is a lot of tension,” said Todd Rapp, a Democratic public affairs strategist in Minneapolis.

Trump, who is “very instinctive”, is trying to exploit that divide even though polls indicate the odds are against him, Rapp told Al Jazeera.

Rural Minnesota is largely white and the experience that Minnesota voters typically have with law enforcement is far different from what communities of colour see in big cities, he said.

Trump has cast protesters as violent mobs and talked tough about law enforcement. His combative tone has served to solidify his rural base, but is not selling well in the Minneapolis suburbs – places like Eden Prairie, Brooklyn Park and Hopkins – where the outcome in Minnesota is likely to be decided.

“The president has had difficulty accepting that there are two sides to the issue of Black Lives Matter and police reform that have to be talked about respectfully at the same time,” Rapp said.

That is a line Biden has been more careful about. He has sympathised with the Black Lives Matters protests and aligned himself generally with the goal of police reform but refrained from endorsing the more strident calls to “defund the police”.

At the same time, the coronavirus and its effect on jobs are top concerns among voters in Minnesota, polls show. 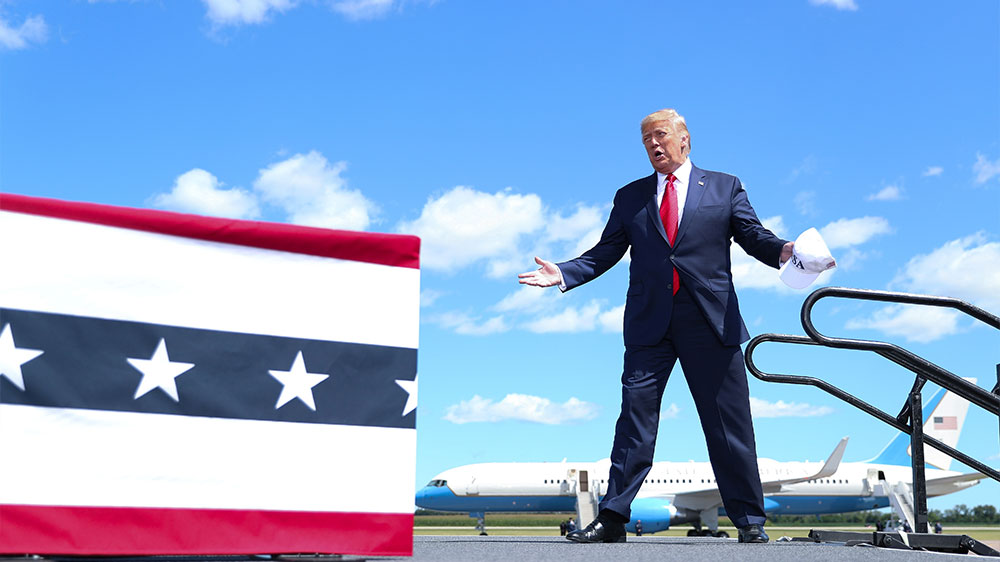 Democratic Governor Tim Walz, who imposed a mask mandate, ordered businesses closed and residents to stay at home, has been the target of recall campaign by Minnesota Republicans.

Trump and Biden are running two very different campaigns sending potent messages about the virus to their supporters.

In his stump speech, Trump is likely to call for a faster reopening as he pushes the US to move past the virus even though cases of new infections appear to be rising and the death toll nationwide has reached 196,000.

Biden has slammed Trump’s handling of the pandemic as a failure that is “utterly disqualifying” for the presidency.

Trump’s appearance at an airport hangar in Bemidji is likely to feature a boisterous crowd of mask-less supporters who will cheer and chant for Trump.

Biden will appear with a smaller, socially distanced group that will likely be wearing masks and observing the governor’s public health directives closely. 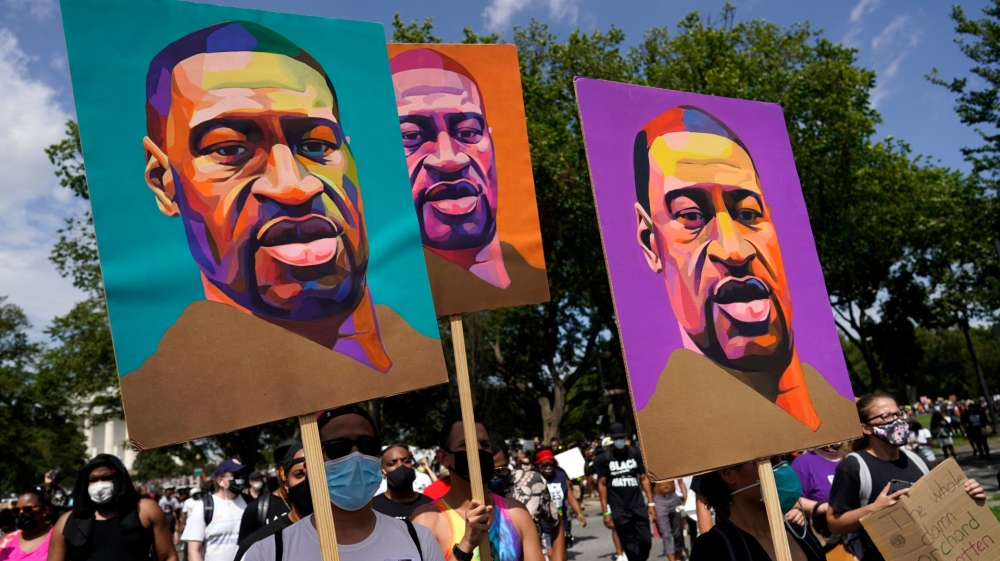 People carry posters with George Floyd on them as they march from the Lincoln Memorial to the Martin Luther King Jr Memorial during the March on Washington, on August 28, 2020, in Washington, DC [File: Carolyn Kaster/AP Photo]

The race in Minnesota is likely to come down to a contest between turnout by Democrats who want Trump out and enthusiasm among Trump supporters who want another four years, said David Schultz, a political science professor at Hamline University who also sees Minnesota in play.

“It all hinges on college-educated suburban women. If they come out to vote like they did in 2018, Biden is going to win the state,” Schultz told Al Jazeera.

“If Biden gives them a reason to think that a Biden presidency is going to keep them and their families safe, they are going to vote for Biden,” he said.

Both campaigns are spending heavily in Minnesota with multimillion-dollar buys of television advertisements which have begun to blanket the airwaves.

Trump has been sending direct mail flyers to voters linking Biden to “rioters” and warning about a flood of immigration and refugees if Biden is elected.

Early voting in person and through mail-in ballots begins in Minnesota on Friday and Biden’s wife Jill Biden will participate in a “weekend of action” phone bank drive starting Saturday, the campaign said.

Vice President Mike Pence will visit the state next week.

Timeline: A series of attacks in France amid a debate over Islam | France